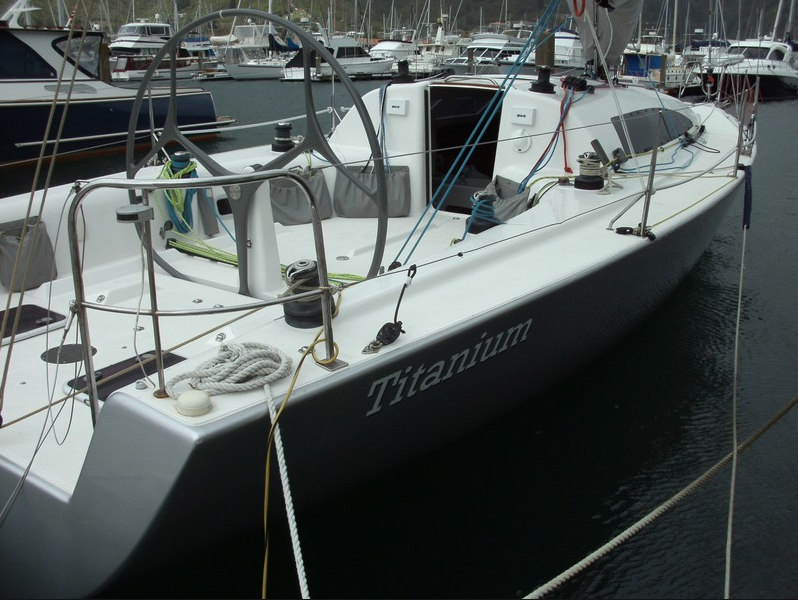 Kevin Murphy owns the Steve Tompson-designed 38 footer Titanium – another new name on the B Division entry list this year. We caught up with him for a quick chat about the boat, which he’ll be bringing up from Auckland for her first ever Bay of Islands Sailing Week.

So is this the original Stomp 38 design?
“Yes it is the original, it was the first one built, and there were only three of them. It’s a Steve Tompson design, the Kiwi sports boat designer, and it was launched in December 2005.”

It’s had a few different owners and names over the years, hasn’t it?
“It’s had two or three owners in Aussie, and then there’s the guy who brought it over from Aussie, he was in Nelson. Then he brought it up to Auckland and I bought it here. Now it’s in Westhaven.”

What sort of boat is she then?
“It’s a racer-cruiser, and more of a racer cruiser, being all carbon and kevlar. But it’s still a nice boat to cruise on, and we have a lot of fun. But we’re not up with the top race-race boats like Anarchy and those boats. They haven’t got a cruising interior like we’ve got.”

Will this be the boat’s first Bay Week?
“Yes, but not mine – it’ll be my third. I did it a couple of years ago on my last boat Prawn Broker.”

As a racer cruiser, you might be forgiven for thinking you’d be more at home in Island Racing, so what made you go into B Division?
“I’ve got a crew that like doing windward leewards. Not that we’re any good! But they just want to do that extra racing. And you needed another boat in that division!”

Who else are you hoping might go into B Division?
“It would have been nice if Provincial Cowboy was doing it as well, but she’s doing the Island Racing. We’re a similar speed to her, to the Ross 40s.”

We wish Kevin and his crew all the best for BOISW, and look forward to seeing you all in 2018.