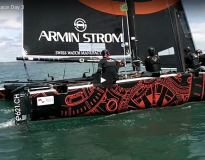 Forget pigs - it'll be flying cats that take centre stage at the Bay of Islands Sailing Week regatta during the last week of January 2016. A new generation of super-fast flying catamarans is expected to launch the popular annual regatta into a new era of yacht racing.
The 2016 Bay of Islands Sailing Week is shaping up to be an international affair, as the regatta's popularity continues to grow overseas.
Page 20 of 20« First«...10...1617181920
Back to top