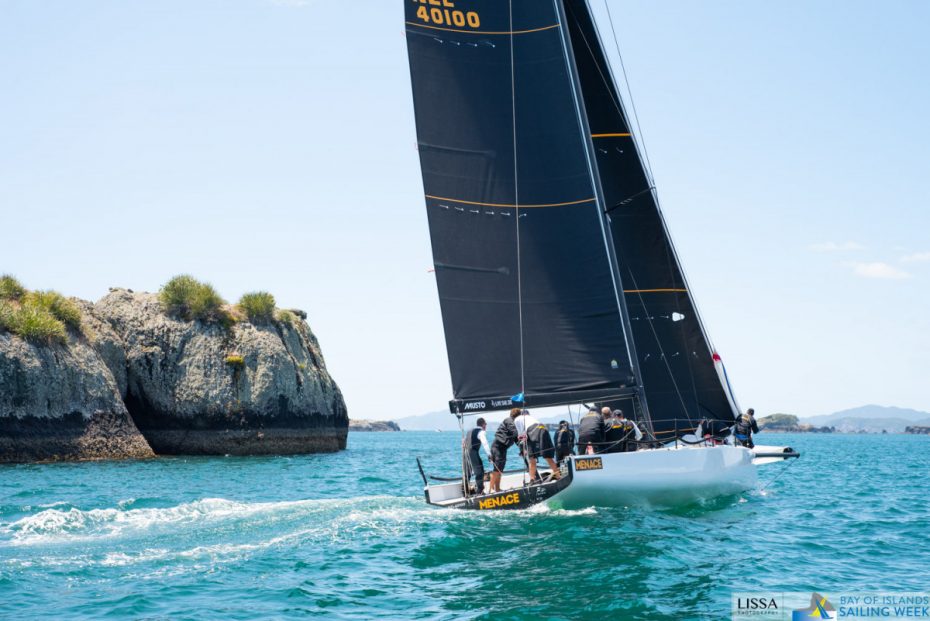 Melges mania gripped the sailing community at this year’s CRC Bay of Islands Sailing Week, with the first ever head-to-head racing between four new-to-NZ Melges 40 class carbon racing yachts making waves in the regatta’s B Division.

The one-design yachts, which were recently shipped in from Europe by several Auckland-based owners, have been in the country for little more than three months, and the owners were looking forward to using the regatta to put them through their paces.

“We all targeted Bay Week as probably the first important, significant regatta for us all as a fleet”, said Aaron Young, Commodore of the Royal New Zealand Yacht Squadron and owner of Checkmate, the first Melges 40 to arrive in the country.

After three days of intensely competitive match racing between the practically identical boats, it was Menace, owned and skippered by Howard Spencer and sailed under the banner of the Royal Akarana Yacht Club, that reigned supreme among the class, taking line honours for the 40-footer division.

On corrected time, AJ Reid’s Anarchy was the dominant force in the closely-watched B Division, fending off the four Melges as well as three other strong competitors to take out the PHRF and general handicap titles.

Racing began on Wednesday 27 January in very light winds, which are a regular feature of the country’s biggest multi-day keelboat event, held annually in the week before Anniversary Weekend. But despite delays on the first two days, all races were completed in time thanks to a reliable afternoon sea breeze.

The final day of racing on Friday was a very different day, and sailors enjoyed a strong southerly breeze throughout the racing area from mid-morning. This allowed all races to start without delays, and provided some challenging conditions for competitors.

Principal Race Officer Ian Clouston described the conditions over the regatta by saying: “In the last three days we’ve had everything I think! Heavy wind, wind shifts – some of the finishes we had a westerly, then a northerly, then a southerly – they had a lot of work on.”

The varied conditions throughout the week also gave different boats an opportunity to shine, keeping things interesting right up until the final race of the last day.

In the regatta’s premier A Division, a small but competitive fleet of five TP52 class yachts raced for top honours. Two of them – Kia Kaha and Formula One – were part of the regatta’s Room For One More programme, which places local youth sailors on board boats for the regatta to give them valuable experience sailing with some of the country’s top crews. By the end of the week, none could compete with the dominance of previous year’s line and general handicap champions Mayhem though, which claimed all three top trophies this year – first on line, first on PHRF and first on general handicap.

E Division was strongly contested by a record 14 boats this year – the most ever entered in the regatta’s small-boat racing division. Local pride was at stake among the mostly Bay of Islands-based fleet, and Peter Boyd’s 4 Fox Sake claimed a win for the home team on both PHRF and general handicap, while Whitianga boat Deep Purple was fastest on line.

Top honours were shared among the 15-boat-strong Island Racing A division, with PHRF champion awarded to High Octane, and 100th regatta entry Bullrush claiming a win on general handicap, while Equilibrium was fastest on line.

Unitec was quick enough in Island Racing D to win both line honours and general handicap, but didn’t compete in PHRF which was won by Marara. While in Island racing E division Udder Life took the win on general handicap, while Prowler was fastest on line.

A small fleet of multihulls also raced in the event, with five multis competing in windward/leeward racing, and three in the Island Racing fleet. Attitude claimed victory on line and general handicap in the M racing fleet, while in the cruising fleet Cation were winners on general handicap, and Apache, skippered by Erle Williams, was fastest on line.

The prizegiving ceremony on Friday after racing was well attended, and regatta chairperson and co-founder Nina Kiff took the opportunity to thank sponsors, volunteers and participants for helping to make the event a success, despite the uncertainty and upheaval of the last year.

Next year’s regatta will be the 20th anniversary of CRC Bay of Islands Sailing Week, which began as an idea in a smoko room, and has grown into the biggest event of its kind in New Zealand, and one of the premier sailing events in the Southern Hemisphere.

Final results can be found here: