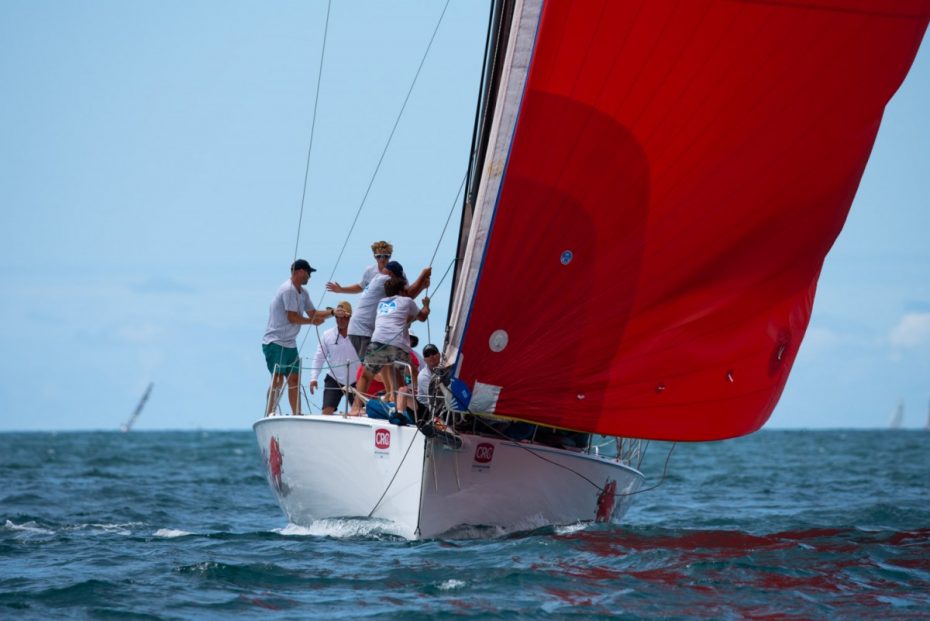 Two weeks out from NZ’s largest multi-day keelboat regatta, and the first 100 entries have been received for CRC Bay of Islands Sailing Week, which starts on Tuesday 26 January.

The 100th entry this year was Bullrush, owned by Janine and Ant Robinson, who have been regular competitors at CRC Bay of Islands Sailing Week for many years. Janine describes them as “repeat offenders” and says they “just can’t help themselves” from entering the regatta each year.

“We can’t go to Australia or Fiji to do any regattas this year”, Janine says, “so we just like coming to the ‘Tropical North’. And we love the beach party – that’s number one!”

With border restrictions preventing sailors from abroad arriving in the country, the regatta is light on overseas entries this year. But organisers say they are very pleased with the support received, despite the upheaval and uncertainty many have experienced due to COVID-19.

“We’ve been really overwhelmed with the support from our sponsors”, says regatta Chair and co-founder Nina Kiff. “We did think we might struggle to cover costs this year, but our sponsors were so supportive and they all came back on board without hesitation.”

Nina says they are pleased to have crossed the 100 entries threshold already, and expect more entries to come in as the regatta gets nearer.

“We let people enter right up until the end of registration, the day before racing starts”, she says, “and we always have a few who wait until the last minute because they’re watching the weather, or they’re not sure if their boats will be ready in time.”

This year has also seen a resurgence in the racing divisions, in which entrants sail three races per day rather than the single, longer race of the Island Racing divisions. With four new Melges 40 class boats in B division, competition will be especially fierce among this fleet, making it one to watch.

C Division, which was abandoned in previous regattas due to low entries, has been brought back from the brink with a keen fleet of seven so far. Among them is one of the Royal New Zealand Navy training yachts Paea II, skippered by Hamish Ivey.

An increase in female skippers has also been noted this year, with the likes of Robyn Caundle bringing Young 88 Rascal Tom with an all-female team from Tauranga to compete. Women’s Keelboat Nationals winners Sally Garrett and Christine Weston will also front a majority-female crew on their Farr MRX, Ovlov Marine.