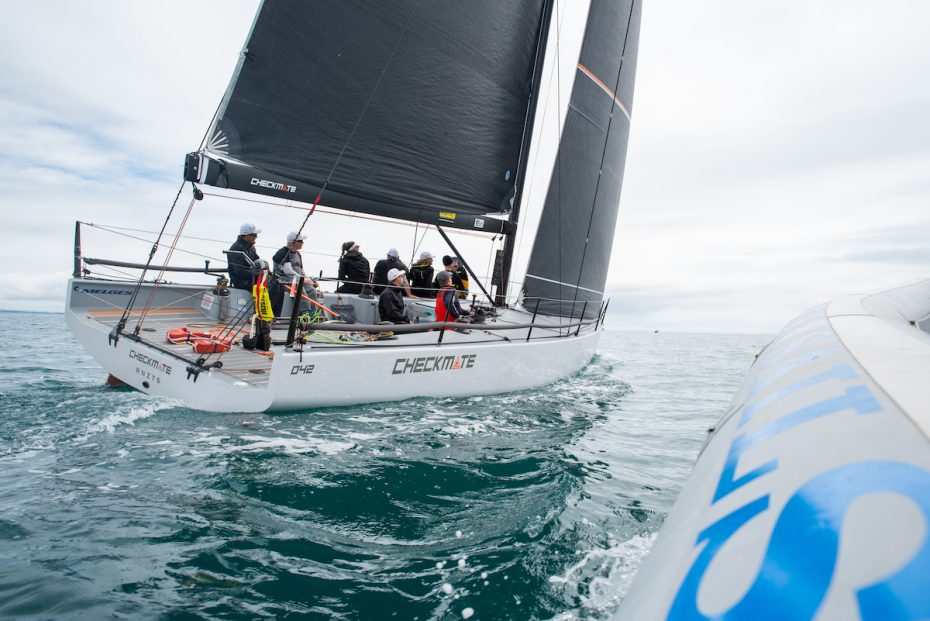 Aaron Young, Commodore of the RNZYS, had a desire to advance the quality of club racing in New Zealand. It led him to impulse-buy a 40-foot carbon canting keeler from Europe within 72 hours of hearing about it, then persuade three mates to do the same. CRC Bay of Islands Sailing Week will be the first time all four recently-arrived Melges 40s will line up on the same start line. And everyone is a little bit excited about it…

The short story, says Aaron, is that he was thinking about getting back into a race boat in about a year, when he figured he’d have the time. Then his brother, who works for Southern Spars in Europe, called him up one day to see if he’d be interested in a Melges 40. He had to move fast though – and he did. Just 72 hours later and the new Checkmate was on its way to New Zealand.

“From there, literally within a week of me buying mine, I managed to convince Steve Mair to buy another one, which is Clockwork”, says Aaron. “I put the word out and word travels pretty fast in the sailing world.”

Soon after, John Cobb bought Sikon, and finally Howard Spencer’s new Menace was packed up and on its way.

“It was going to be fine sailing one on my own”, says Aaron, “but to be able to convince other people to join the party was really neat, because now we’ve got four nearly identical boats.”

The Melges 40 class was developed as a grand prix alternative to the 52 footers, offering the same caliber of sailing, but reducing the costs, crew requirements and general logistics of mounting a campaign. It didn’t really work out in Europe, as the same crews were in demand for both fleets, often at the same time. But their loss is New Zealand’s gain, and Aaron is hopeful the increased competition among the 40-footers, and within the Melges 40 fleet itself, will help raise the caliber of New Zealand club level sailing.

“That was a big goal for me personally, especially as commodore of the Squadron”, he says. “I personally felt that the quality of club racing wasn’t really advancing, and the fleet was aging. To do it, people want newer boats, you get good people sailing them and you’ve got to get better yourself. That was the driving force behind the idea.”

He and the other owners are working on setting up a Melges 40 class association in New Zealand, with stipulations including an owner-driver rule, and a requirement to have a minimum of two female crew on board as well.

“And that’s not to make the numbers up at all”, says Aaron. “They’re good. For example one of my crew is Megan Thomson, who was selected for the America’s Cup youth team, and Olivia Mackay. She hasn’t quite made the Olympics yet but I’m sure she will. So they are good sailors in their own right.”

Even though the class rule isn’t finalised, Aaron says he’s hopeful the other owners will stick to the stipulations in their ‘gentleman’s agreement’ for CRC Bay of Islands Sailing Week.

One thing is for sure though – racing between these four nearly identical boats will be close. And in the already competitive and evenly matched B Division, top of the podium will be anyone’s to win.

“Bay Week will actually be the first time we’ve all lined up on the same start line so it’ll be pretty exciting on Wednesday,” says Aaron. “We’ve all targeted Bay Week as probably the first important, significant regatta for us all as a fleet.”

As to whether there’s much variance between the four Melges 40s that would give any one of them an edge, Aaron says the only difference is that Sikon and Menace are running masthead code zeroes, while Checkmate and Clockwork are fractional.

“I would anticipate windward/leewards would be very tight between the four of us, so it’s really going to come down to who puts the boat in the right place around the course. Then for the island race in the afternoon, being light, the masthead may have a small advantage over us with the fractional zeroes, but you’re not talking a lot.”

With a typical forecast of light air in the morning and sea breezes in the afternoon for this year’s regatta, we’re likely to see technical and tightly fought racing from the 40-foot fleet. But as any seasoned CRC Bay of Islands Sailing Week competitor will know, it’s not entirely about the sailing.

“It’s a great time of year for a start, the weather is normally superb”, says Aaron. “It’s nice to get away for a regatta and go and do a few days of serious sailing, and have some fun afterwards.”