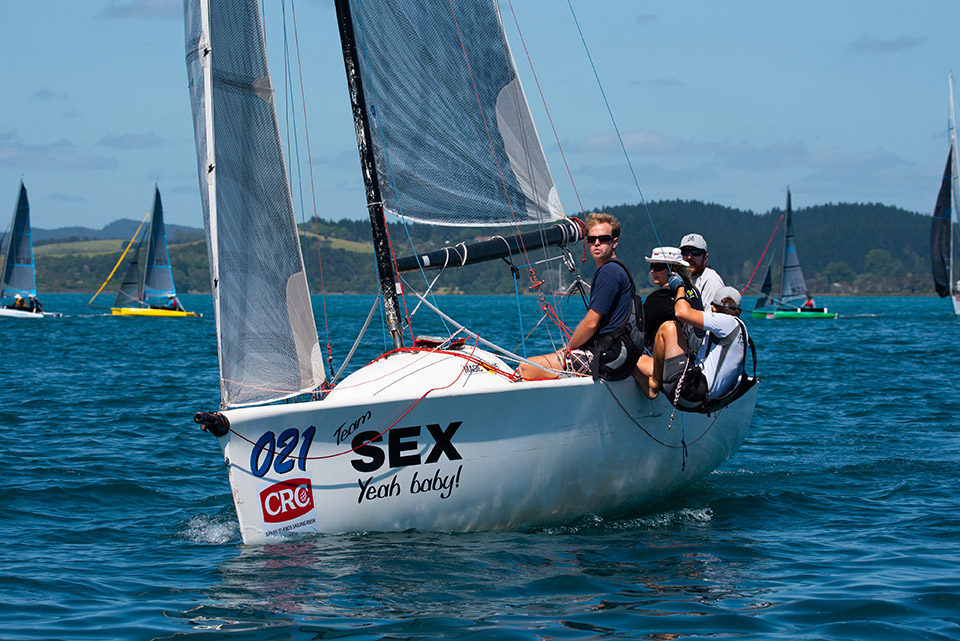 Despite the surge of female participants at CRC Bay of Islands Sailing Week in recent years, it’s still something of a rarity to encounter female boat owners at the event. However, there’s one woman who has been bringing her own boat to the regatta ever since it started, 18 years ago. And she’s as enthusiastic about it now as ever. We caught up with Anne Hirst, owner of the provocatively named Team SEX, for a quick chat about sailing, marriage and spanking…

Well it’s called Team SEX. It was originally sponsored by ‘Scotty’s Electrical Xpertise’, and I was going to change the name. When I bought it I said ‘oh my god I have to change the name it’s so terrible’, and everyone went ‘nooooooo it’s so cool you’ve got to keep it’! So I took out the dots between S, E and X and I put ‘Yeah Baby!’ underneath and so it has been ever since.

Tell us more about the boat then…

It’s a Magic 25 which is a sport boat, but it’s not as mad as some of these foiling boats now. And not as fast as the 49ers. Under certain conditions we’d be up there I guess. We’re kind of one of the early sport boats. The Magic 25s are a one design boat, so you don’t change anything.

What attracted you to sailing sport boats?

How did you get into sailing?

I did dinghy sailing with my dad as a kid in Borneo, and then sadly I moved to England and they said ‘would you like to go sailing?’ And I said ‘hell no it’s bloody freezing here’!

So there was a big gap while I lived in England, and when I came back to New Zealand I got a share in a 25 foot keeler and raced out of Pine Harbour because we were living near there. Then we sold that and bought into the Magics. Chris [my husband] went first and I thought actually this is a lot of fun, but he’s not going to like it if I want to sail with him, so I better get one! We’ve been fiercely competitive ever since, which is fun.

You compete against your husband – does that mean you put SEX before marriage?

We sail against each other because we can’t sail on the same boat! Chris sails on one of the other Magics. Everyone thinks we argue about it a lot more than we do, we probably don’t talk about it that much at all, but the bragging rights standing in the car park at the end of the race is good.

Do you keep a tally of who’s won the most Bay Weeks?

No actually! It would be interesting to see – I’d say we’d probably be quite even over the years, and we both go through phases of doing really well and spanking the other, and then it turns around so we can’t brag too much ‘cause we know we’re going to get spanked sooner or later.

What’s your position on the boat?

I’m always mainsheet trim, but I’ve been very lucky in that I’ve had a series of very talented helmsmen or women who have in general come out of the youth training scheme at the Squadron, and have gone on to great things. One of them was the NZ national match racing ladies champion, one of them has gone on to do the Volvo, one of them sailed back in the day in the America’s Cup before he sailed with me, and the latest who has now moved on because of family commitments is Peter Burling’s brother Scott.

And I now have a guy called Patrick who has come out of the youth scheme himself. He’s a talented man so hopefully we’ll go really well.

Looks like there will be good competition this year?

We might have record sport boat numbers – I think [the record] is 13, and we’ve got 13 this year, so I’m hoping for one more.

Since I started [BOISW] I’ve done every single one. It’s the best regatta, it’s awesome. Congratulations to all the organisers for making it better and better each year. It’s going to be amazing.

Thanks Anne, and we look forward to seeing Team SEX and Enigma (Chris Hirst) battle it out for bragging rights in the car park at the end of the regatta!