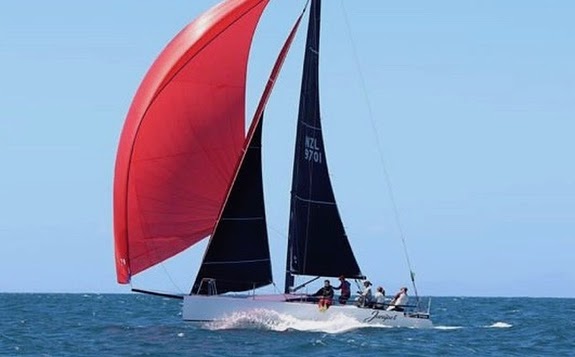 New boats at CRC Bay of Islands Sailing Week always garner attention, and this year one of them is a slick and sporty 28ft J/Boat owned by Lode Missiaen. His J/88 Juniper is the only one in the country at present, but he’s hoping it might peak the interest of those who like the size and capability of a Young 88, but are keen on a newer boat. We had a chat with Lode about his boat, and how he’s feeling about sailing in his first ever CRC Bay of Islands Sailing Week next week…

You’re relatively new to NZ, where are you from originally?

Relatively is the word, yeah! I’ve been in New Zealand for three and a half years now, so I’m starting to feel at home here. I’m from Belgium originally.

Did you bring Juniper here with you?

No, but I did get the boat from Europe. It’s a J/Boat, which is an American boat builder in Newport RI, but they have a factory in France. It arrived in July 2018 and we put it together here in Auckland, and then I sailed my first race in September 2018.

What made you import a J/Boat?

I was looking around when I moved here in 2017 – I was checking out the sailing scene, and I wanted a sporty boat. I looked at the type of racing that is happening here, and it looked like this size of boat did some very competitive sailing. But the boats were very old in Auckland, the Young 88s and Ross 930s and that type of boat. So I decided to go for a new boat.

It’s an identical size to a Young 88, it’s not a super light boat, it’s basically two and a half tons, it has an inboard diesel. When the conditions are right and I can fly my kite and it planes, I can fly. But I hear in the Bay of Islands at that time of year it’s normally light.

What kind of sailing have you been doing so far?

Mostly club racing at the Squadron, and I did some other races here and there. Some short handed races like the Gold Cup. I did the Coastal Classic for the first time this year but it was a bit of a boring drag race with no wind. So I’m doing my first Bay Week next week.

I hear you’ve already had a win in the Squadron Series?

Have you sailed in the Bay of Islands before?

In Christmas 2018 I sailed up there to just cruise around and it was really good. We are sailing up on Sunday, so we’ve got two days and we’re going to stop in Tutukaka, then Monday we sail to Opua. And because the crew is a bit new, we’re going to go out on Tuesday and just practice a little bit!

You’re entered in Island Racing – why not the racing divisions?

The crew I have is not so experienced, so it’s more to just enjoy the sailing and the scenery and everything, but we still sail competitively of course.

Who’s your crew for CRC Bay of Islands Sailing Week?

I have my usual bowman, and then I have a couple who’ve been sailing with me for about a year, they’re still learning, especially one of them. Then I have a young guy who lives up in the Bay of Islands and has sailed a couple of times with me, and his father who is apparently a good sailor who will also come along. So we have a full crew, and a bit of local knowledge is always helpful!

Your J/88 is the only one in NZ at the moment – do you think that’ll change?

I would have hoped that. It’s something new in Westhaven, and given that the Young 88 is such a popular class but it’s like 20 or 30 years old, I thought people might say wow that could be a fun boat. In the meantime I’m the only one here in the country. For the size of boat, it is quite expensive, when you can buy a Young 88 for $30k. They are fantastic boats though. I cruised around at Christmas to Great Barrier for 18 days, and I can sail it alone. It’s just such a practical boat.

What are you most looking forward to about CRC Bay of Islands Sailing Week?

I hear only good things about it. The weather will hopefully be nice. I always enjoy the sailing, I’m always into competition when I race, I’m just like that, even if I have to catch up – you make the best out of it. Then it’s always fun after the races, when you can have a drink. And there’s the party on Thursday, we just booked tickets to that, so I think we’re going to have a good time there.