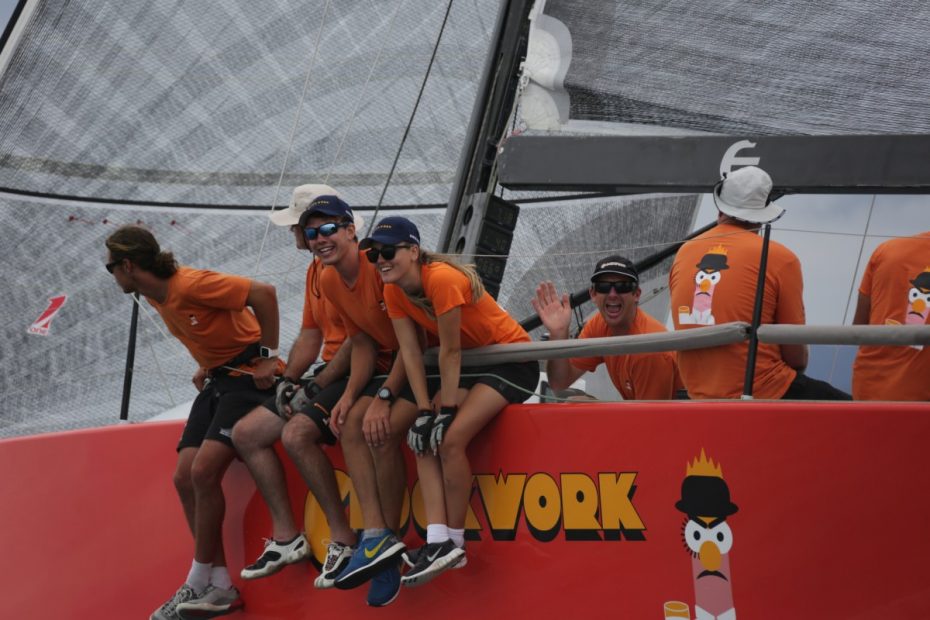 CRC Bay of Islands Sailing Week has long been known in sailing circles as New Zealand’s most fun regatta. Many participants love the event for its family-friendly, holiday feel, as much as for the competitive element. It’s an inclusive event, where families often sail together, and a whole spectrum of boats and people converge to enjoy three days of colourful, scenic and competitive racing.

This year the regatta again proved its broad and enduring appeal, with the biggest entry numbers in nearly a decade – 104 boats across 13 divisions.

There was a noticeable change in the makeup of the participants too. One of the most obvious changes was an increase in female participation, both on the water and on shore.

“I think there’s more female sailors this year,” said Regatta Chairperson Manuela Gmuer-Hornell. “I haven’t been on the water personally, but just seeing the photos and people around the marquee, it seems there are more girls taking part, and taking more responsibilities on board too, rather than just being ballast.”

Manuela is the first female Chairperson the regatta has had in its 16 year history, and is pleased that the regatta is becoming more representative, in terms of its participants and its organising committee.

One of the female sailors taking part was Sharon Ferris-Choat, the Kerikeri sailor whose multiple achievements in sailing include Olympic Games, Volvo Ocean Races and World Records. Sharon was one of three female crew on TP52 Kia Kaha. She too believes that women are playing a bigger part in yacht racing, and would love to see more women at the professional level in sailing.

“There’s been a huge influx of women participating and doing some of the key roles.” Sharon told us.

“It would be really neat to see more women taking on the challenge of buying boats and setting up race teams themselves. But I mean crikey, it was considered extreme bad luck a hundred years ago to have a woman on a boat, so we’ve got to consider that we’re doing leaps and bounds!”

Her advice to anyone trying to get into sailing was: “Just go and connect. It’s who you know. And those who-you-knows will teach you what you need to know.”

“There’s lots of kids who are super keen to do it,” said Robbs, “so we put the word out to the fleet to see who would be keen to take a kid along for the regatta, and there was a really good response.”

One of Robbs’ students, 12 year old Oscar , sailed on Tony and Nina Kiff’s boat Wetherley. He was allowed to take the helm for the entire race on day two of the regatta, and placed a respectable 9th out of 16 boats. Not bad for a first-time keelboat helmsman.

In the Weta fleet, Ted Houry, aged 11, was so concerned about crew weight on day three – the lightest day of the regatta – that he jettisoned his dad from the boat, and went on to sail to victory on his own.

Paralympian Chris Sharp, who placed second overall in the Weta racing against able-bodied opponents, was pleased to see younger sailors getting in and giving it a go.

“Ted was in the two-handed division but thought he’d have a crack at the single, and went out there and nailed us! He showed that if it’s light, he’s dynamite,” said Chris.

Full results from the three days of racing, plus overall series winners, are available here.

Photography from all three days of racing and video round-ups covering each day’s events can be found on the regatta website and Facebook page.