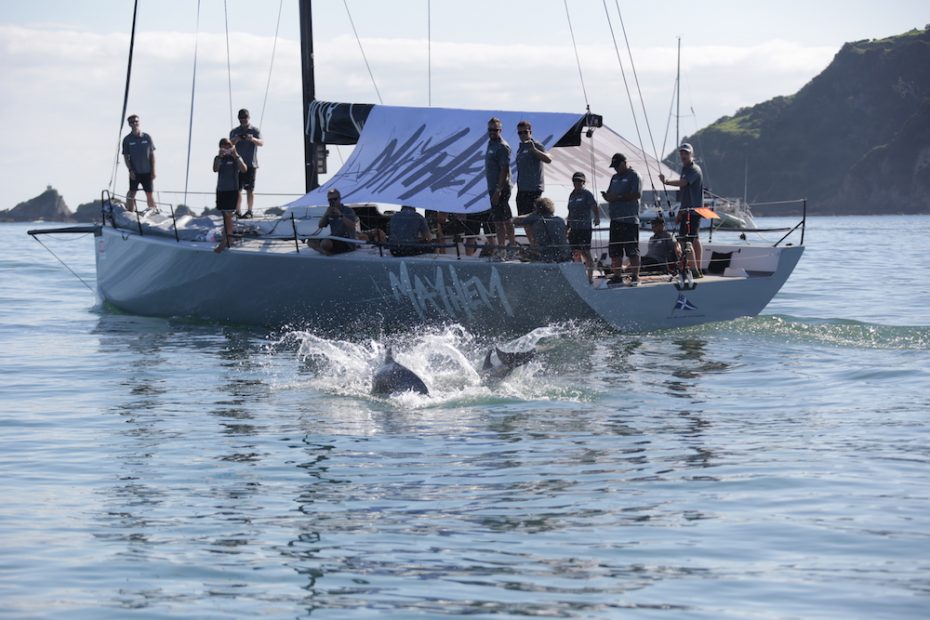 Dolphins kept crews entertained as they waited for racing to start in calm conditions.

It was a close call early this afternoon, as Race Officers made the difficult decision about whether to abandon racing on the third and final day of CRC Bay of Islands Sailing Week 2018.

In an almost complete absence of wind, the ‘big boats’ on the outer courses finally started their first race just before 1pm. The rest of the fleet had a further agonizing wait until what little wind there was filtered through to them.

With such light conditions, there was little in the way of nail-biting action, but there was universal relief that the day’s racing didn’t have to be abandoned.

By close of racing, there was too little time for divisions A and B, Multihulls and Tornados to sail their bay race, so they headed for home with two races completed.

In the overall results, Mayhem reigned on Line and IRC in A division, although closest rivals Georgia took a win on PHRF. And in B division, Anarchy claimed a predictable but well deserved victory after having been pressured into switching over from Island Racing.

In the Multihulls, MOD Beau Geste won their retribution after a Coastal Classic defeat at the hands of arch rivals Frank Racing, taking out the series win in convincing style.

Closer inshore, the Weta division managed to complete all three of their races before the cutoff time. Paralympian Chris Sharp continued his consistent run of second placings to secure second overall for the regatta.

When asked whether he was pleased with his second place overall, Chris said “I’m disappointed, but that’s just the sportsman in me.” He carried on to say “I love the event, and Ian [Sutherland] dragged a better performance out of me. By the time I was finished I was keeping up a lot better.”

Chris described his first CRC Bay of Islands Sailing Week as “brilliant”, and says the Weta fleet will be back “bigger and better next year”.

Elsewhere in the Weta fleet, it was young Ted Houry who stole the show today, kicking his father George Houry off the boat because of ‘weight concerns’ in the light conditions. He went on to single-handedly win the race.

In the Sports Boat division, the hotly anticipated line honours battle between Ghost Rider and Angry Dragon didn’t disappoint. A shaky start by Ghost Rider on day one of the regatta quickly gave way to a blinding run of first place finishes in the next five races – just as you’d expect from a crew comprising America’s Cup and Volvo Ocean Race veterans like Phil Jameson and Brad Marsh.

But their local rivals Angry Dragon weren’t going to make it easy for the star-studded crew, scoring a win on day one, followed by a string of second places. With little in it at the start of day three, Angry Dragon clawed back another first place in race seven today, making it as close a contest as everyone had expected. But at the end of the day, it was Ghost Rider who eventually triumphed in the final series results for line honours.

At the evening Prizegiving ceremony, Regatta Chairperson Manuela Gmuer-Hornell encouraged participants to seek out and personally thank at least one of the 74 volunteers who dedicated their time and energy to make “a really successful CRC Bay of Islands Sailing Week”.

Results from each of the three race days, as well as final Series Results, can be found here. 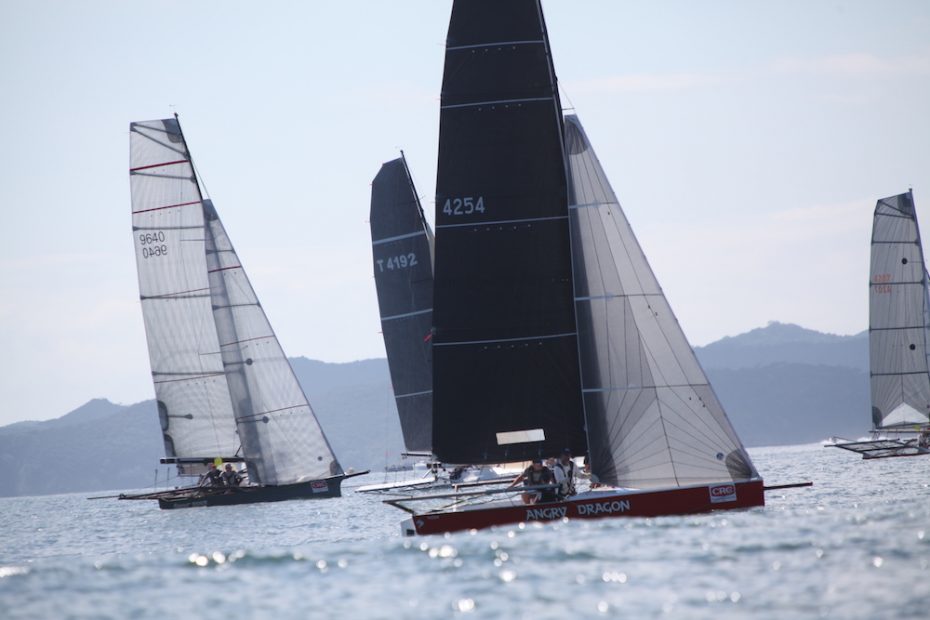 In the Sports Boat division, Ghost Rider (left) came out on top of local boat Angry Dragon – but only just. 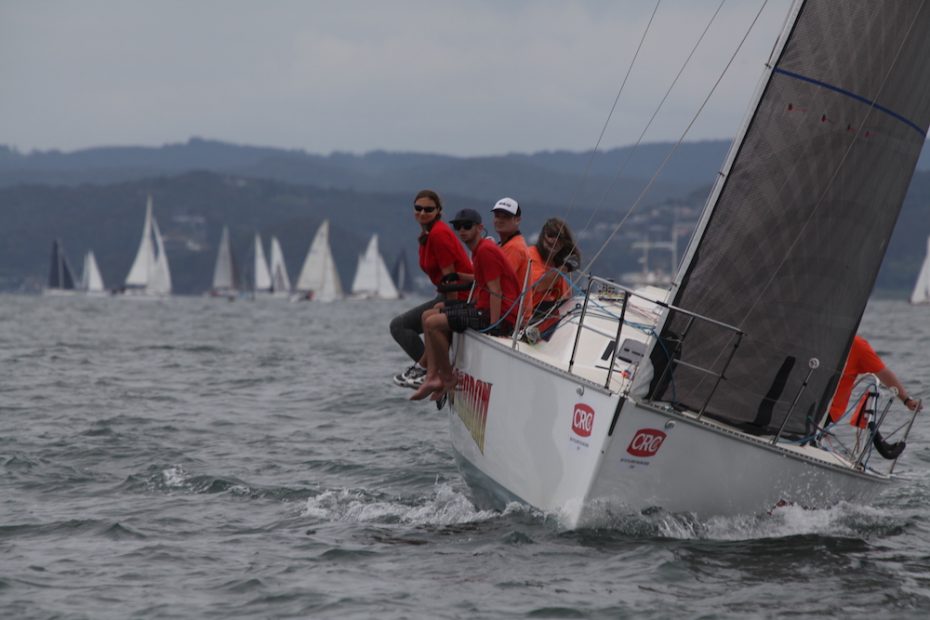 Despite the delayed start, most of the day’s races still went ahead once the breeze filled in.