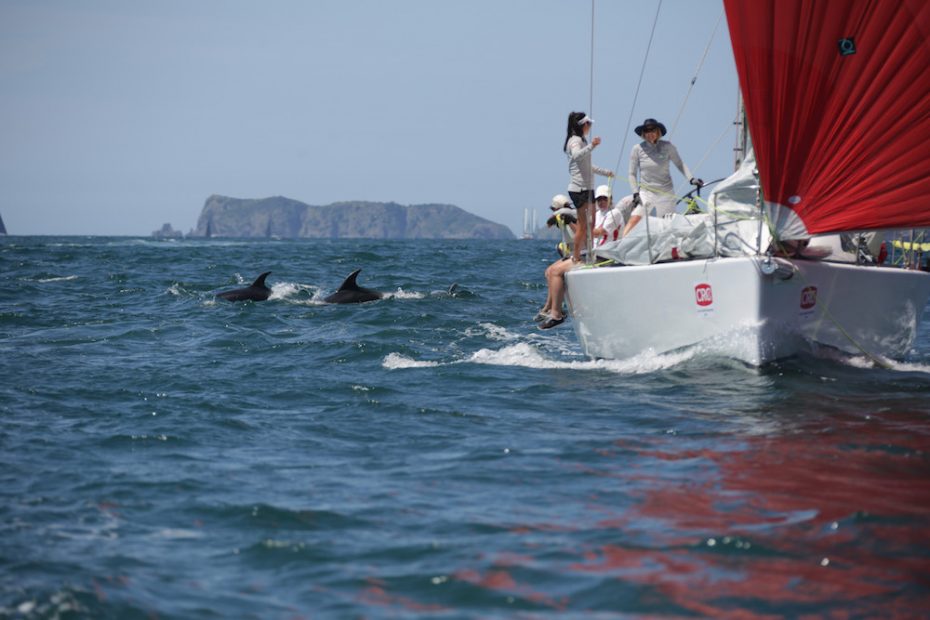 Above: Racing got underway around midday today, which gave keen crews a chance to jump in for a quick dip with the dolphins beforehand.

Another delayed start today was welcomed by the fleet, who seemed to unanimously support the Race Officer’s decision to postpone racing until the breeze had properly filled in.

Some crews took advantage of the delay to jump in for a swim with the local dolphins. But they were back on board and ready to go as races got underway around midday in a steady 10 knot sea breeze.

As racing concluded for the day, Race Officer for the Island Racing courses, Ian Clouston, described the day’s sailing as “perfect”.

“When the breeze filled in around midday and we got underway we had a perfect race. It was very good racing today, and all boats finished within the time limit, so there were no issues,” Ian said.

The Island Racing or ‘Cruising’ Divisions are typically well supported at CRC Bay of Islands Sailing Week. Many entrants enjoy the more relaxed style of racing these divisions offer, preferring it to the fast-paced windward leeward battles of the ‘racier’ divisions. And 2018 is no exception, with nearly half the total regatta entries – 51 boats – opting for the Island Racing Divisions.

Grant Wichman on Integrite was first over the line in Island Racing C Division, and was doubly pleased with the Race Officer’s decisions today. “We were very happy today because they changed the course to the one we wanted. And they also waited for the wind to increase and become steady. Today we had a fair breeze and everyone had a good sail – it was much improved on yesterday.”

On Saltshaker, it was less about the competition and more about just having fun – a common theme among the Island Racing fleet at Bay of Islands Sailing Week. Spirits on board Saltshaker weren’t the least bit dampened by coming last in Island Racing C Division today, and as co-owner Imogen said: “It’s all about having fun, we don’t mind where we come.”

Also in Island Racing C, regatta founders and volunteers Tony and Nina Kiff handed over the helm of their boat Wetherley to Youth Sailing student Oscar for the day. Oscar is on board Wetherley for the regatta with the help of Youth Sailing Coach Robbs Hielkema, who saw an opportunity for his students to gain valuable ‘big boat’ experience by finding them spots as crew for CRC Bay of Islands Sailing Week. Oscar rose to the challenge ably, and Wetherley placed a respectable 9th out of 16 boats with the first-time keelboat sailor on the helm.

In the Weta fleet, Paralympian Chris Sharp was nothing if not consistent for the first half of the day, with a further two second places added to the three second placings he secured yesterday. But it was the final race of the day when Chris really shone, sailing home over two minutes ahead of his nearest rival to secure his first line honours of the regatta.

Full results for yesterday’s and today’s racing, as well as series results to date, can be found here.

In the evening, a surprise appearance by Peter Montgomery at the apres-sailing function was well received by regatta organisers and participants alike. Peter made a short speech as part of the regatta’s 16th birthday celebration, on behalf of one of the regatta’s major sponsors, NZL Sailing Foundation. He congratulated the regatta organisers and volunteers as he again described CRC Bay of Islands Sailing Week as “the best big boat regatta in New Zealand,” and added: “long may it continue”.

Racing concludes tomorrow with a forecast of similar light and fine conditions. The Prizegiving ceremony will take place in the North Sails & hall Spars Marquee at 7.30pm. 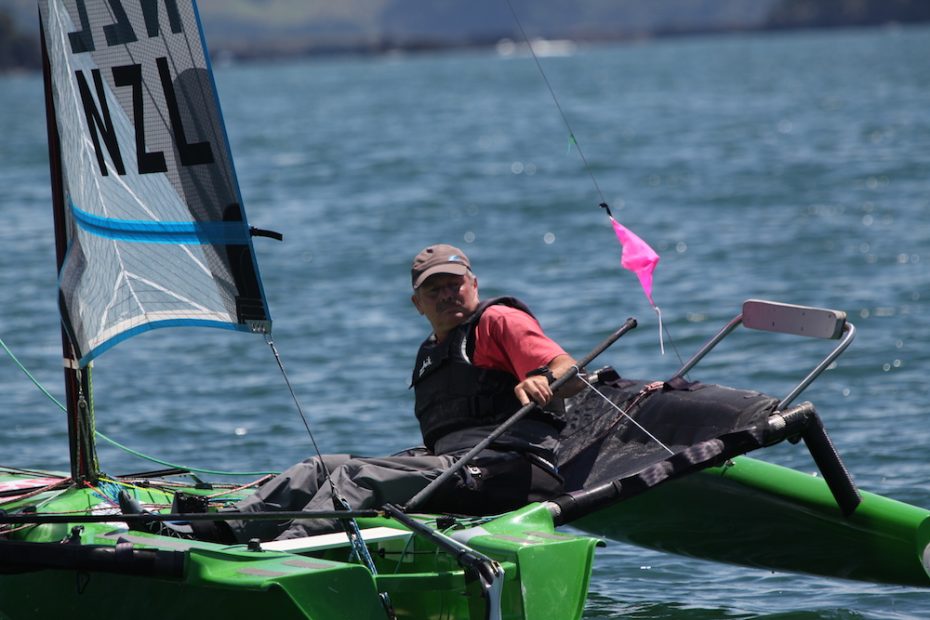 Above: Chris Sharp shows the Weta fleet how it’s done, with two further second places and a first place to round off day two. 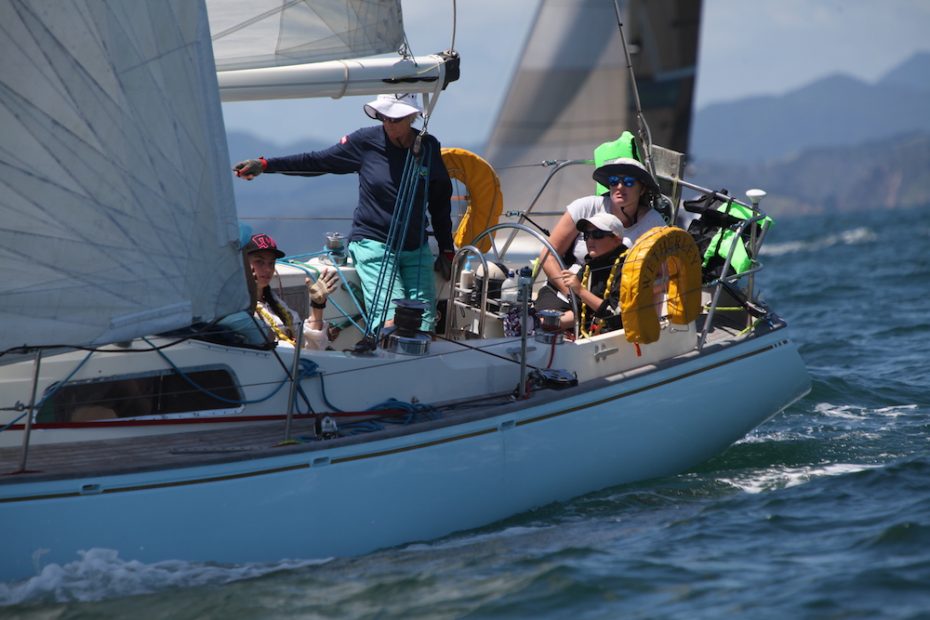 Above: Local Youth Sailing student Oscar takes the helm on Wetherley and steers her to a respectable 9th place in today’s race.