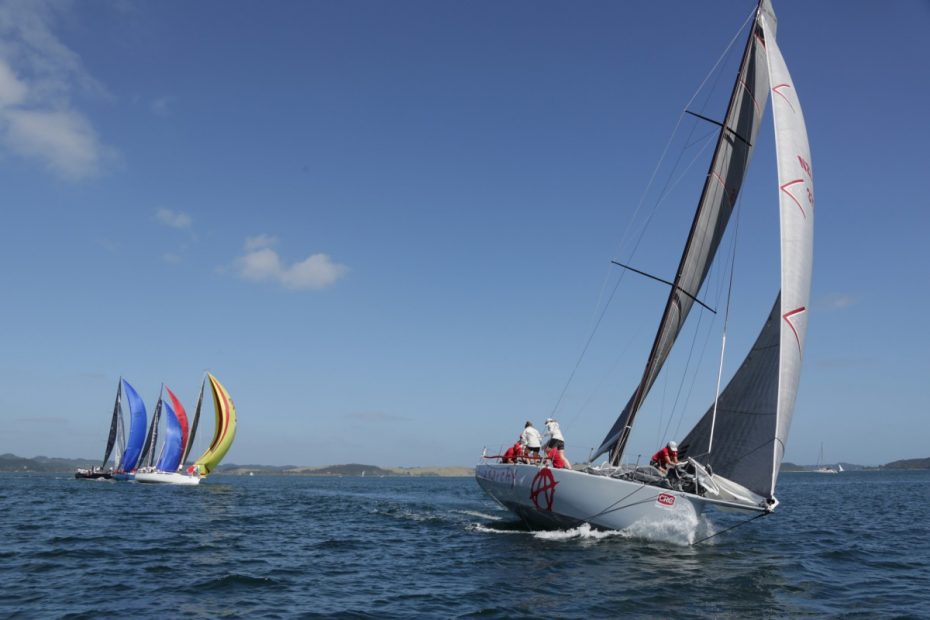 Amid fears that windward leeward racing may be on its last legs, the growing entry list for B Division at CRC Bay of Islands Sailing Week 2018 shows there’s renewed interest in high performance, competitive racing outside of the TP52 fleet.

At the 2017 regatta, a mass exodus from previously well-supported B Division left organisers no choice but to disband it, as performance boats in the 30-40 foot range opted for more relaxed racing among the Island Racing fleet.

But this year there are indications of a return to form, with Steve Purton’s Ker 40 Icebreaker bucking the trend and returning to windward leewards, as well as some new names throwing their hats in the ring.

Leading the charge is Clockwork, recently purchased and shipped from Perth, WA by RNZYS Commodore Steve Mair. The Bakewell White 37 was launched in Auckland in 2010 as the General Lee, and is a close relative of well known New Zealand boat Anarchy. Crewman Kevin Peet says Clockwork’s cabin top and extra room inside mean she’s not quite as quick as her younger sibling, but that compromise was part of the attraction for her new owner, who plans to race her offshore.

Kevin says they opted for B Division, rather than following the crowd into Island Racing, because they get the best of both worlds – competitive windward leeward racing, and a longer bay race in the afternoon.

“The windward leeward side of things is good because there’s only two or three regattas a year where you get to do windward leewards, and there’s an island course afterwards. And I think a lot of people feel it’s a long way to go for one race a day.”

The Steve Thompson-designed 38 footer Titanium has also signed up to race in B Division, so it’s already shaping up to be a competitive fleet, and Kevin is hopeful others will join them too.

“Young Guns, we hope they’ll go into B, and we hope Anarchy can be persuaded. John Meadowcroft, who owns Carerra, has just bought a Ker 40 too, so he could be up for that. I think that sort of class is going to be pretty competitive, like how the 50 footers were last year, I think the 40 footers will be pretty similar to that.”

Entries for CRC Bay of Islands Sailing Week 2018 are now open at https://bayofislandssailingweek.org.nz/enter/ and entries received before 31 December can avoid the late entry fee.

CRC Bay of Islands Sailing Week is held annually during the last week in January. Now in its 16th year, the regatta is the biggest of its kind in New Zealand. The event is made possible by sponsors CRC Industries NZ, NZL Sailing Foundation, North Sails, Hall Spars, Mount Gay Rum, Zhik and Harken, along with a large team of volunteers from around the country.