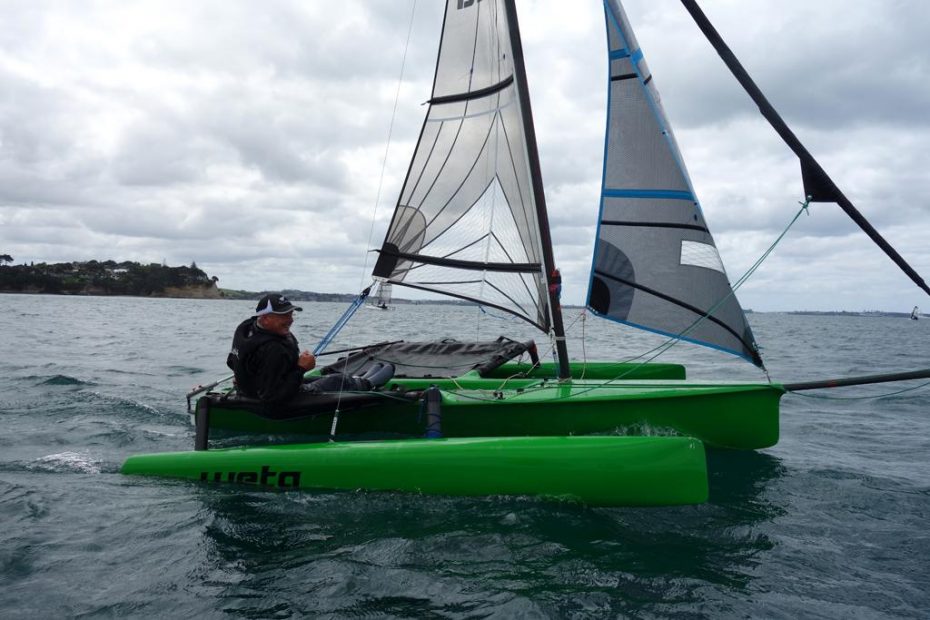 Paralympian, Weta enthusiast and bloody good bloke Chris Sharp was doing some last-minute repairs to his Weta when we called him, after it suffered damage while he was rescuing another boat from the rocks. He’s gearing up for his first ever CRC Bay of Islands Sailing Week, and was delighted to tell us about the Weta class…

Can you tell us a bit about the Wetas, and why you like sailing them?

The Wetas themselves have been around for 15 years now, and not a class I’d had anything to do with pre-accident. But since I put myself in a chair, I’ve been sailing boats that are… compromised in some way, as far as performance goes.

I got the opportunity coming back from Rio to sail in a Weta, and the manufacturer gave Andrew May and I – who were on the Sonar in Rio – an opportunity to sail these things and see if we could sail them, with the intention of sailing them two-up. We went sailing two-up and decided we didn’t like each other enough to actually want to keep doing that, so we started sailing them individually.

They are a boat that are a handful for para-people, but it’s possible, and the performance is fantastic. They are a lovely machine to sail, and I’ve been sailing them ever since.

The beauty of it is they are mixed, in that there’s a couple of us, or three of us, that sail in para form, but the remainder of the fleet of around 150 boat owners in New Zealand are all able-bodied. So our victories are always more important because we’re not actually restricted to racing against para-people. We literally have no thought of that whatsoever – we just sail with the intent of winning because it always feels natural to do so.

Will this be your first CRC Bay of Islands Sailing Week?

Yes, I’ve never sailed Bay Week before, so it’s going to be fascinating for me. It’s my home, and I can’t think of anything more fun than doing a regatta with so many mixed classes all around, everyone racing their little hearts out. I think that’s my environment, one hundred percent, so I’m really looking forward to it. I’m super excited about it.

There are seven Wetas on the entry list for BOISW, are they all local or from further afield?

There are two local boats: me, and George [Houry] is another local from the Bay club as well. The rest of them are all coming from around the country.

Our aim is to make this one of our race features of our programme every year. This is our inaugural Bay Week, and we want it to be fantastic so that we can entice the other members to pre-plan their year so that they can be here.

Will BOISW be a warm-up for the Weta Nationals?

The Nationals for us are at Whitianga at the Mercury Bay Yacht Club, and we have redesigned our programme since the Masters – this class was horrendously successful there. Up until that time the focus hadn’t been on race-oriented programmes, whereas I’m far more interested in doing a race programme that’s designed ever year.

So this year we’ve got Bay Week and then we’ve got Whitianga as our Nationals. Next year our aim is to have four regattas spread around the country with one on a lake. So one of them being Bay Week, and the other three being mobile every year, so we can try and get around the country.

We’ve got a number of members down in the South Island, so we need to go to them instead of asking them to come to us all the time. So it’s going to be a mobile race programme, every year it’ll be somewhere different.

Socially, the guys that own these things are fantastic people, and I’d love to spend time with them. So if we all travel together to different places, we’re going to encompass the whole of the national body of owners and that will be good for everyone.

With 150 boats in New Zealand, it’s a strong class isn’t it?

It is a strong class, there’s lots of them, but people get into them and the go “oh yeah I’ve got a fantastic beach boat” and they go out there and blast all over the place. But they don’t realise the value of the class as a race class. Because it’s as hard as anything else I’ve ever had to sail, to get the very best out of it.

Do you know of any other para-sailors taking part in Bay Week?

To my knowledge, I might be the lone person representing people who can’t walk! But I can’t actually confirm that. None of my friends are going to be sailing here, they’re all spread around the country and it’s too far for them to come, so I think I may be the only one.

The Weta is designed to be sailed single-handed or two-up, but you’re sailing-single handed aren’t you?

Two-up is a format that is very popular, but I’m a stubborn prick and I like to be on my own. I like to get things either right or wrong and know that it’s my fault either way. So yes, I’m sailing solo. It thrills me more that way.

Is there any advantage to sailing two-up, or is it a balance between weight and those extra hands?

The two-up boats prove to be two minutes faster around an Olympic track when it’s blowing, and two minutes slower when it’s light. So the balance is pretty equal. In the very light, a solo boat will take off on a two-up, and it’s reversed when it’s heavy. But if you take the time of an Olympic track which is around 40 minutes, the variance is two minutes in the double’s favour when its blowing over 20 knots, and two minutes in the solo’s favour when it’s blowing under 10. So they’re bloody close. If I can beat a two-up I feel really good, and I’m sure they feel the same about dicking me when they can!

Are you still in the ‘Green Machine’?

Yeah that’s my baby, it’s my good old boat. It’s an antique – it’s one of the prototypes when they first designed the class and made them, Roger [Kitchen] made this one for his son as a trial, and that’s the one I sail. I love the fact that it’s old. I love the fact that it was built when they started. It is number six – they made six of them in Roger’s garage, and this is one of the ones that came out of there. There are still a couple of them around, but not on the race track.

You’re a pretty big fan of the Weta aren’t you!

I’m really passionate about this class of boat. I’ll sail anything, I’ll sail a bathtub, I don’t care what it is! But this makes my eyes twinkle, and I like that feeling. So I love pushing the boat, I love promoting it as much as I can.

People need to realise there is a boat that is possible to sail from young to old and still be competitive. It’s not like a Moth which you just can’t do when you get older, or a kite board that involves good mobility. This boat can be raced hard by people that are just switched on, and for that I think what an incredible class – there aren’t many classes you can say that for.

Cheers Chris, and we’ll look out for your green machine – at the front of the Weta fleet! 🙂

For more information about the Weta class, visit www.wetamarine.com or check out the Weta Facebook Page.