Above: The crew of Temptation sweat it out in the sweltering midday heat on Day One of CRC Bay of Islands Sailing Week 2018.

An early sea breeze filled sails this morning for the first day of CRC Bay of Islands Sailing Week. Calm conditions initially delayed racing, but a light breeze filled in from the north east around 11am, allowing racing to get underway, much to competitors’ and organisers’ delight.

The fleet of over 100 boats basked – and some sailors baked – in glorious sunshine for the remainder of the day. With all races completed, and no major incidents reported, day one of New Zealand’s biggest multi-day sailing regatta was declared a success by Regatta Chairperson Manuela Gmuer Hornell.

“It was a better day than we expected with the wind,” Manuela said, “I don’t think we expected the wind to fill in that quickly, so that was really good. We thought we might have to wait until 1 o’ clock to start racing, but it was all underway by about 11 o’ clock, and we had some great racing once things got started.”

On the race course, there were some close tussles in the ‘big boat’ divisions. A protest between the only two boats in the Multihull division – Frank Racing and MOD Beau Geste – was taken to a protest hearing but later dismissed. While a protest in A Division could potentially win the award for fastest ever protest resolution, as the eagle-eyed on-water judges made an instant call in Temptation’s favour over a protest by Mayhem at one of the mark roundings.

But it was Georgia that was the standout competitor of the day in A Division, taking line honours in all three races.

After last year’s collapse of the usually competitive B Division due to a lack of entries, organisers were thrilled to see nine boats competing in the division again this year. New entry Clockwork put up a valiant effort to chase down her younger sistership Anarchy, claiming second place in two of the three races, while Anarchy took two first places.

In the Weta single-handed racing, Paralympian Chris Sharp is making good on his goal to claim a podium place, despite being the only para-sailor in the fleet. His ‘No Name’ trimaran came second in all three of today’s races, but no doubt he’ll be aiming for gold in the remaining two days’ racing.

The Island Racing fleets were again well supported, with a total of 51 boats in five separate divisions choosing to race a single, longer course around the Bay of Islands, rather then two windward leewards and a shorter bay race.

Racing resumes tomorrow, Thursday 25 January, with a scheduled start of 10.30am likely to be slightly delayed again due to forecast calm conditions in the morning.

On Thursday evening, a party to celebrate the regatta’s 16th anniversary will be held at the North Sails & Hall Spars Marquee in Opua.

Full results from Day One of CRC Bay of Islands Sailing Week can be found here. 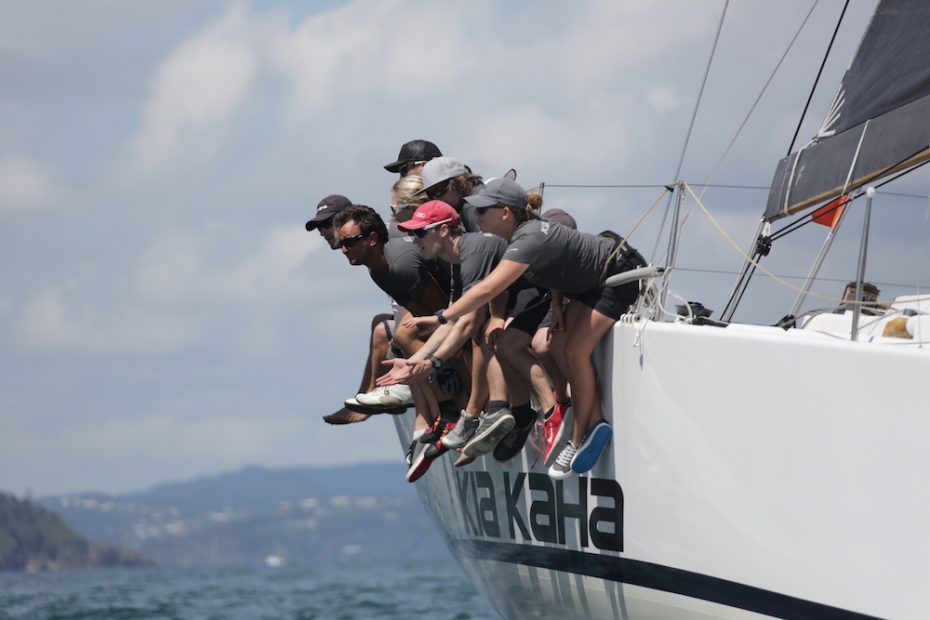 Above: Kia Kaha crew ‘hiking out’ to gain maximum advantage over their rivals in A Division. 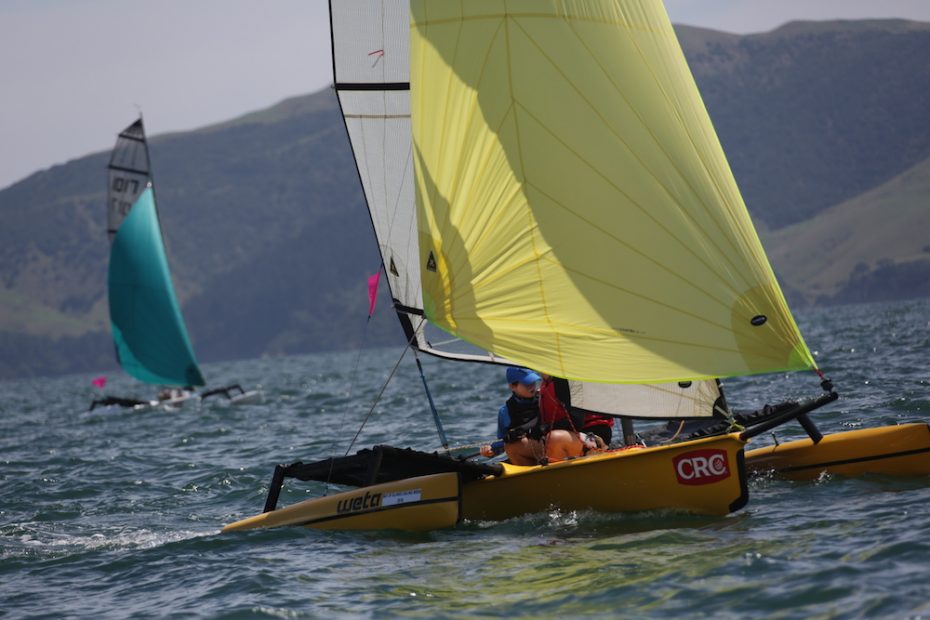 Above: Young Bay of Islands sailor Ted Houry sails with his father George Houry in the two-handed Weta division.